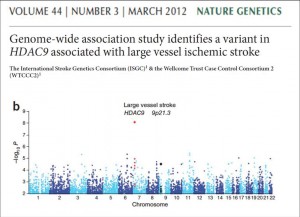 Our work in this area covers both monogenic diseases causing stroke as well as more common polygenic stroke.

Work in monogenic stroke primarily focuses on CADASIL which is now recognised as the most common single gene disorder causing stroke. We have developed clinical, MRI and genetic algorithms for optimal diagnosis. We have shown that conventional cardiovascular risk factors such as smoking increase the chance of stroke in CADASIL. As part of an International collaboration we have evaluated the affects of drugs for cognitive impairment. This work links closely to our National referral clinic for CADASIL. Current work includes the use of next generation sequencing (NGS) to look for genes other than CADASIL (NOTCH3) causing familial small vessel disease stroke.